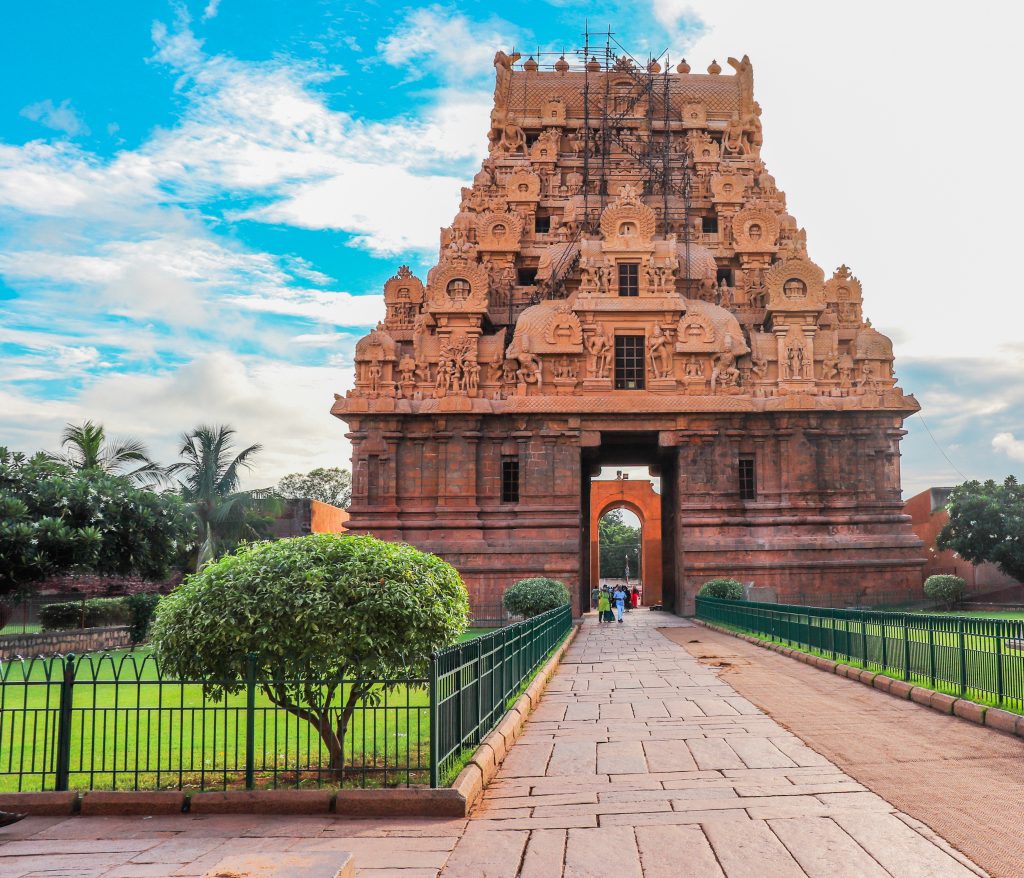 Art, architecture, and heritage is the trinity that defines the essence of Thanjavur. Ruled by Cholas, Nayaks, Marathas and eventually the British, it is believed that each empire influenced the city in their own unique way. The Marathas are credited for introducing Sambar  (when a cook tried to make dal and added tamarind) whereas the British…

Famously known as the ‘rice bowl’ of Tamil Nadu; Thanjavur is home to UNESCO World Heritage Site and the Great Living Chola temples of India. Here is my complete guide to the best things to see and do in Thanjavur.

Where did the name Thanjavur originate from?

The name, Thanjavur has an interesting origin. Accordingly to mythology, ‘Thanja’ was an asura (demon) killed by Lord Vishnu and hence the place came to known as Thanjavur. Historians believe that the city was named after a Mutharayar King, Thananjay

Thanjvaur, formerly known as Tanjore, has a unique position in Tamil Nadu’s history. It thrived as the ancient capital of the Chola kingdom. Between the 10th and 14th centuries of the Chola period, Thanjavur was at its peak. The first mark of its prominence was when it served as the empire capital paving the way in making the city a great centre of learning and culture.

As years passed, the Chola Empire eventually grew into one of the most powerful empires India had ever witnessed under the rule of Rajaraja Chola I (also known to many Tamils as Rajaraja the Great) and his son, Rajendra Chola I. During the reign of Rajendra Chola I, the capital was moved from Thanjavur to the nearby Gangaikonda Cholapuram. After the Cholas, the empire was ruled by the Nayaks, the Marathas, and even the British.

What is Thanjavur famous for?

Famously known as the “South India’s Cradle of Arts”, this small and sleepy town has much to offer. You can visit the Brihadeshvara temple, which a UNESCO World Heritage Site, the bronze foundries, watch artists create the famed Tanjore paintings, spend time at the Thanjavur Royal Palace and do so much more!

Best places to visit in Thanjavur

The Brihadishvara Temple or the Big Temple

Tourists make a beeline to visit the UNESCO World Heritage Site famously known as the Big Temple. The temple is always buzzing with activity; you will spot several tourists with their guides or devotees going about their daily rituals or people just being awestruck by its beauty. It is, after all, one of the ‘Great Living Chola Temples’ in India. There is no entry fee to visit the temple but I would advise you to keep a few hours aside to visit the temple and hire a local guide to take you through the place. There is lots to see and learn and a good guide can make your experience all the more memorable.

Visitors are required to purchase tickets and once you enter, you can begin by visiting the Maratha Palace complex. The Royal Palace Museum showcases sculptures, weaponry, elephant bells, and the headgears adorned by the rulers.

Mahratta Darbar Hall where Maratha rulers gave audience in a grand but faded pavilion adorned with colourful murals (including their own portraits behind the dais). As you exit the passage, the magnificent Saraswati Mahal Library Museum is on your left, through a vibrant entranceway.

Leaving the library, the Art Gallery is on the left. It is set around the Nayak Palace courtyard behind the bell tower. It contains a collection of stone carvings and superb; mainly Chola, bronzes, including some fabulous Natarajas in the New Visitors Hall. 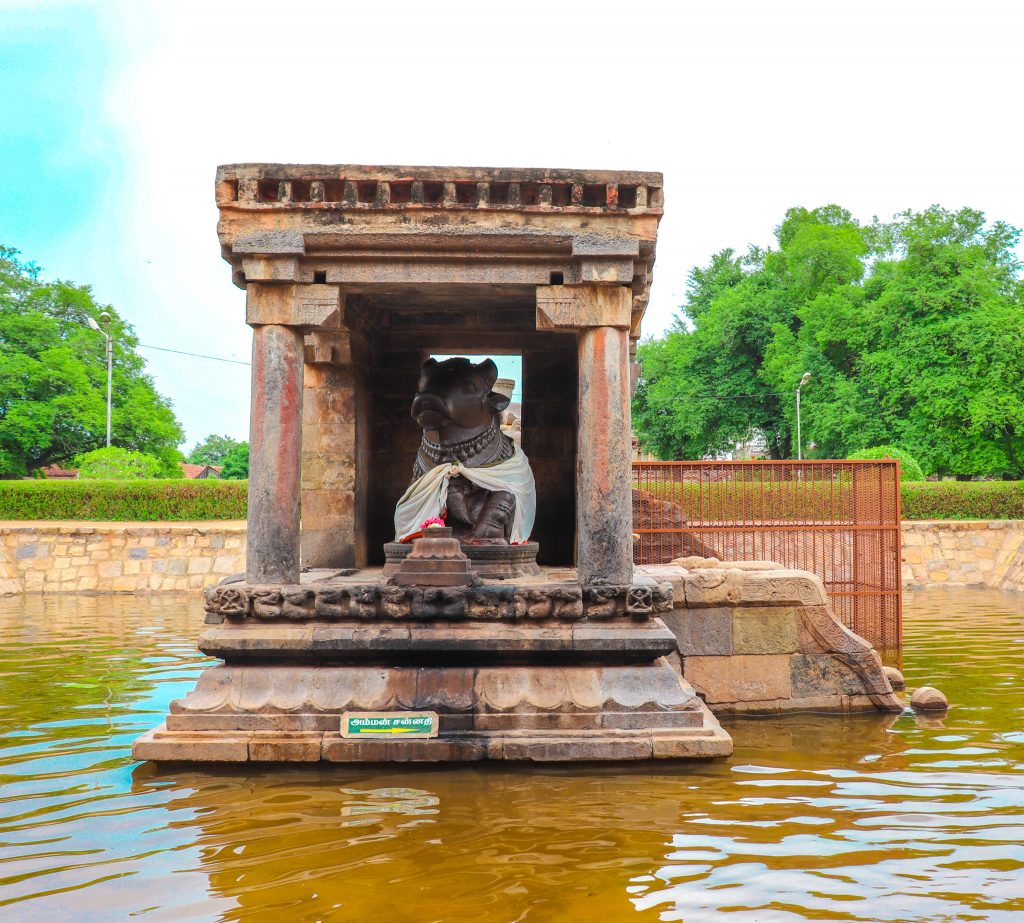 This temple has a legend about Airavata, the white elephant of Lord Shiva, worshipped him here to get rid of a curse given to him by Sage Durvasa. It is also said that Yama, the Lord of Death, worshipped Lord Shiva here as well. This temple is located in Darasuram, the Airavatesvara Temple is one of the many Shiva temples in Thanjavur. Along with the other temples in Thanjavur, this is considered one of the greatest living Chola temples.

The architectural magnificence of Thanjavur is not complete without the beautiful temple carvings seen in the Gangaikonda Temple, which has been declared as one of UNESCO’s World Heritage Sites. This temple is about a thousand years old and is known as an integral part of Tamil History.

This church was constructed by Rev. Schwartz more than 200 years ago. Though there is nothing much great about the artistic work compared to other sites, the church is still operational under the CSI Trichy-Tanjore Diocese. The morning service which is conducted in English takes place every Sunday at 7:00.

This garden is a captivating little park in the middle of the Brihadeshwara Temple and the Schwartz Church. It is very pleasant to watch children play in the heart of the park and witness their innocent laughs and smiles. The park also has an eye-catching little train and a temple in the middle of the pond, which is called theppakulam. Boating is also available in the pond.

What are some famous souvenirs from Thanjavur? 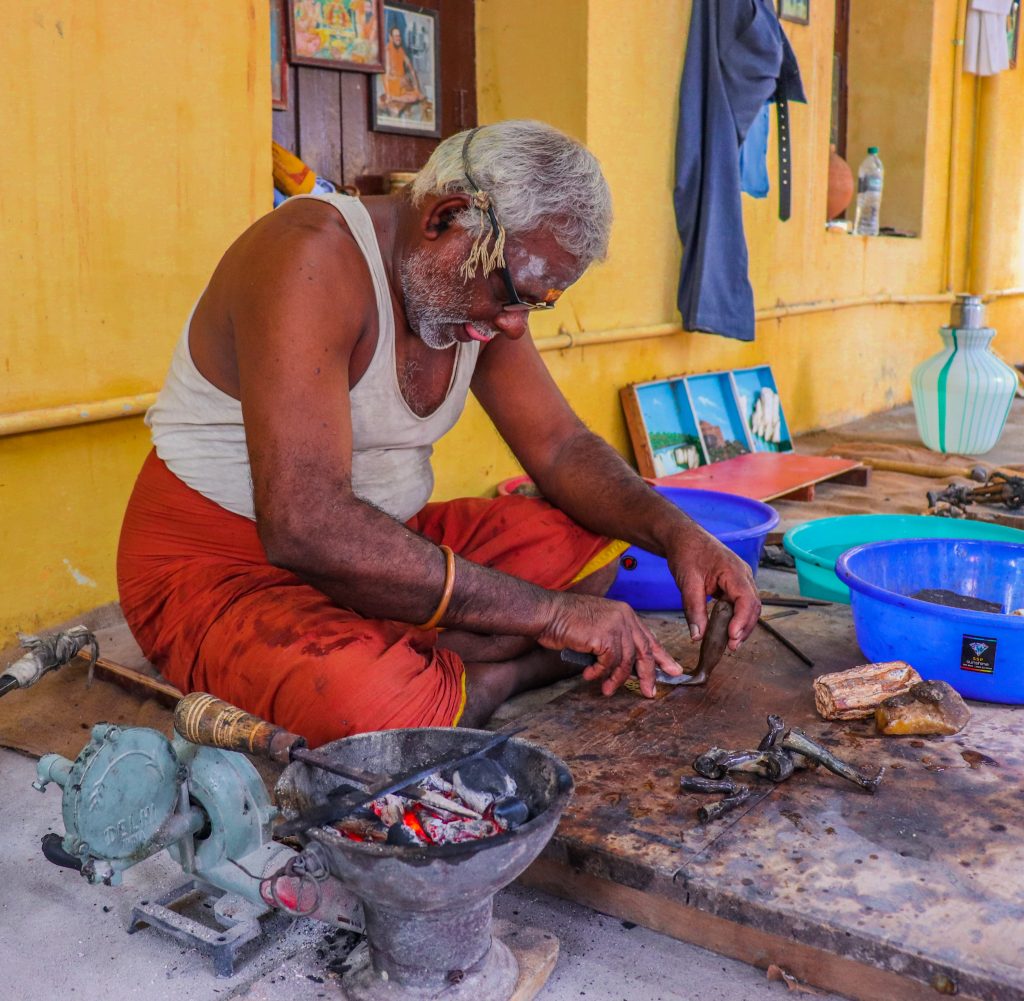 Thanjavur Dancing Doll, Tanjore Paintings, and Tanjore Art Plates like the Lord Balaji are some of the popular souvenirs in Thanjavur

If you are planning to get souvenirs from local shops, it is advisable to use cash though many local vendors have started using Google Pay as an option. An outlet inside the palace sells old and new artworks in which credit cards can be used as a payment. If you want a gallery that exhibits and sells a wide range of artistic bronze idols, Thanjavur paintings, and artistic plates, Poompuhar Art Gallery is the place to be.

Getting around Thanjavur: Some Useful Tips

How to reach Thanjavur?

Thanjavur is the headquarters of the Thanjavur District. The city is an important agricultural centre located in the Cauvery Delta  with an area covering  128.02 km²(49.43 sq mi) and had a population of 290,720 in 2011. It is also known as the Rice bowl of the state of Tamil Nadu.

Do you have any questions on Thajavur? Let me know in the comments below 🙂