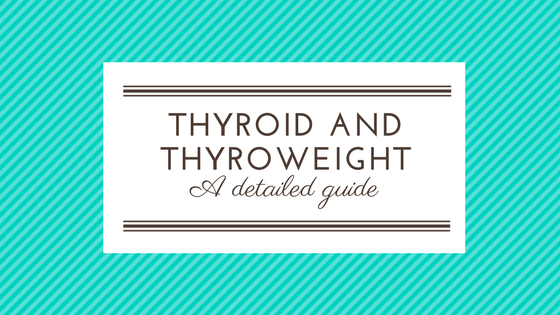 From being labelled “too lazy to exercise” and “unhealthy”, I have seen two women who are an important part of my life being constantly stigmatized because of a medical condition that they can’t do much about. Yes, I am talking about the disorder of thyroid and thyroweight-. Two of my aunts have been battling thyroweight -a condition of weight gain and tiredness under thyroid disorder, or the past decade. They exercise, eat healthy, are avid trekkers and yet there are some people who continue to make disparaging remarks about them.

Unfortunately, even in this digital age, all people know about thyroid disorder is that it makes you “fat”. They fail to realize how deep-rooted this problem can be and the various consequences of this health disorder can have if not treated on time.

I have seen my aunts suffer, struggle and eventually make peace with their condition. I have seen them heroically face all odds to live a happy fulfilling life. Which is why; I strongly believe that everybody should be well aware about Thyroid disorder and thyroweight. I have put together some facts that you need to know and some myths that need to be busted.

What is thyroid exactly?

The thyroid is an important gland that is located in the neck region of a human body. A healthy thyroid is important for us to maintain a balanced mood and overall good health. When functioning normally, this butterfly-shaped organ produces adequate amounts of two hormones which help regulate the rate of metabolism in our body.

So I have a thyroid, too?

What are the common symptoms of thyroid disorder?

Some of the symptoms of thyroid disorder include:

Research says that over 8 million women are unaware that they suffer from thyroid disorder. They attribute the above-mentioned symptoms to their age or their lifestyle These symptoms are generally not considered to be important enough to visit a doctor. For more information on the symptoms please visit  http://thyroidindia.com/thyroweight/

Take my aunt for example; she was 38 years old when she first started noticing an unexpected increase in weight followed by constant fatigue. Being a teacher at a school, she attributed these factors to increase in her workload. It was only a year later that she was diagnosed with thyroid disorder after we consulted a specialist who recommended her to undergo some tests.

Studies believe that over 42 million Indians suffer from thyroid disorders. 11 % of the urban population is believed to have a thyroid disorder, with women being 3 times more prone to the disorder than men. Like my aunt, I am sure many women often neglect these early symptoms.

Will a patient have it for life or can thyroid disorder be cured?

Speaking from my aunt’s experience, thyroid disorder cannot be cured. However, the problems associated with it are not permanent illnesses and both are treatable through simple medication and self care. After her diagnosis, my aunt started attending yoga classes daily, made changer to her diet and took her medicines regularly. It has been 5 years since her diagnosis and she is living a normal happy life.

One should always remember, neglecting the disorder can lead to life-threatening ailments including heart problems and decreased brain functioning.

Myths around Thyroid and Thyroweight

There are several myths surrounding the causes, symptoms, treatment and effects of a thyroid disorder. Thus, it is essential for one to be aware of the real from the wrong in order to protect oneself. Among the many myths, the most common ones are:

There is a consistent belief that health problems are only a part of old age and that we can live carefree, neglecting our bodies till retirement. This is evidently a wrong assumption given the increasing cases of mental illness, osteoporosis, heart attacks, fatigue and muscle pain being found at a young age today. In fact, thyroid disorders could be at the heart of many of these aforementioned ailments. People are vulnerable to thyroid problems right from the age of 35. Cases of youngsters in their teens or in their twenties reporting thyroid disorders are also becoming common today.

The thyroid hormone helps in the normal brain development of a baby in the mother’s womb. Thus, people of all ages can be impacted by the problem.

#2 Only Women Get Hypothyroid

#3 Thyroid treatment does not require medication

It is believed that professional medical treatment for thyroid disorders is unnecessary and that self-medication alone can solve the problem. This is far from the truth and can be dangerous. While dietary and lifestyle changes are important to sustain a healthy thyroid, it is only one part of a course in the treatment process. If you have been diagnosed with thyroid disease, ensure that you follow the proper treatment while also incorporating other healthy habits into your life.

#4 Swelling in the neck

Hypothyroidism leads to lowered metabolic rates and can lead to weight gains. Individuals who are diagnosed often blame the disorder as being the sole cause of obesity while ignoring the lack of regular exercise and a proper diet in their daily lives. Thyroid disorders should not be used as a reason to help an individual justify their neglect towards taking care of their healthy looking bodies. On the contrary, small weight gains must not be ignored as insignificant and treatment must be sought if other symptoms such as lethargy and fatigue are felt at the same time.

Obesity and a swelling in the neck need not always be the reason for thyroid disorder. Nonetheless, they can be probable symptoms to a problem in the thyroid. When noticed along with other symptoms, individuals must seek treatment with a doctor immediately for early diagnosis and treatment.

As I always say, you should always consult your doctor to seek clarifications or recommendations for tests and medicines. Never self-medicate or stop taking your medicines without your doctor’s approval.

How can you help?

It is important that we encourage and support all the men and women who have thyroid disorder and are struggling with thyroweight in whatever way we can. I, for one, try to join my aunt in her yoga classes to constantly motivate her. Another thing that you can do is try to spread awareness on thyroid disorder as widely as possible to ensure cases can be diagnosed and treated early.

That’s all from me. Does anybody in your family suffer from thyroid disorder? How are they coping with it? I would love to know in the comments below.

Disclaimer: I attended a discussion on thyroid awareness facilitated by Abbott India Limited. Any opinion expressed in this blog is my personal opinion and not the opinion of Abbott India Limited. Abbott India Limited does not assume any liability for the content of the blog. The blog post is not meant to be a replacement for a doctor consultation, nor is it a medical recommendation or prescription of treatment for people having thyroid problems. Any reader of this blog suffering from thyroid problems should specifically consult his/her doctor for the same and follow the suggested course of treatment.