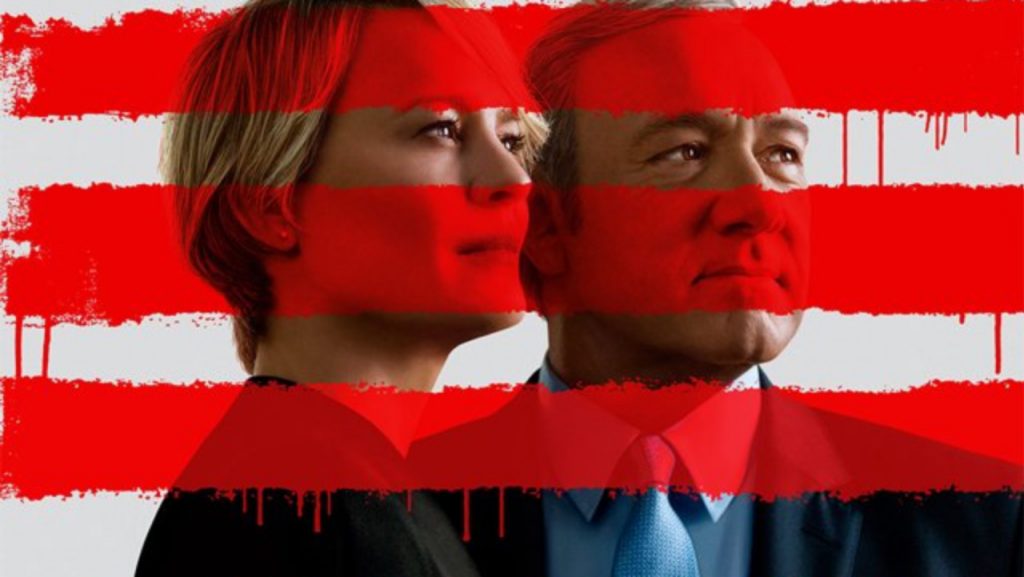 A tremendous amount of will power and pep talks with myself is what it took for me not read the many reviews and spoilers of Homecoming of Terror, the first episode of the much anticipated 5th season of House of Cards. It was only last night that I fired up my laptop, got some popcorn and sat to watch the episode

Homecoming of Terror starts off with an address to the nation by FLOTUS Claire who addresses the issue of homegrown terrorism ending with “My husband and I want to protect you. In two weeks’ time, you will be heading to the ballot box to decide what kind of country you want to live in. It’s a profound choice. But no matter who wins this election, we’re going to need to work together, watch out for each other, and yes, watch each other, to keep us all safe and sound. Tell us what you see.” Claire’s demeanour is icy and you literally get the chills as you decipher what she is indirectly trying to tell you; the war is imminent and the Underwoods will go to any extent to hold on their power,

On the other side, Frank Underwood makes his appearance. In his trademark brash style, he storms into the chambers where his actions are being debated upon and whacks the newspaper out of the hands of a congressman. True to his style, he addresses the Congress before he is dragged out on the orders of the speaker. Frank makes it clear; he will not yield and he clearly is above the law.

You can feel goosebumps all over your skin as your realize that the Underwoods’ intend to continue using equal parts manipulation and equal parts coercion to further their agenda of their ‘war on terror, a war against ICO’. The tone is set for the rest of the episode.

During Jim Miller’s funeral, Claire cries silently as Caroline talks about her husband. I couldn’t help but wonder how real the tears were. Are we finally going a new dimension in Claire’s character is season 5? Only time will tell.

The entire episode is peppered with these little moments which hint towards what the fans can expect in season 5.

The scene where Claire is talking to Joshua’s mother is particularly poignant. You think that the Claire will try to cut a sympathetic figure but all you get is a tough interrogation through which Claire wants to “dial up the terror”. You hope that the mother won’t fall for Claire’s tactics but she plays right into her hands.

Hannah’s and Will’s argument over her posting a viral video sympathizing with Joshua’s mother adds a new twist to the tale. Can Will and Hannah really fight the dirty fight to bring the Underwoods down? Or will Hannah’s political naivety negatively affect her husband’s election run since the campaigning has been to a halt? Again you have to wait and watch how this unfolds.

I have to say one thing; I don’t think I will be ever able to predict Frank’s moves. That man is always 5 steps ahead in the game and he proves it this time, too, when it is revealed that Joshua has been in his custody all along. Joshua’s death with its ‘good usable footage’ is something Frank believes will help his war on terror. His ruthlessness makes you wonder, is power really that important?

From all that was shown, the scene that made me stop and think was when Frank and Claire, unaware that a committee had been put together to investigate their crimes, walked out of the White House in their night clothes and shook hands with supporters who had gathered outside the gates assuring them, “you have nothing be afraid of”.

Does that mean he is confident to get his war against ICO? That the immigration ban and stricter screening are going to be executed? Are these going to be the major themes throughout the season? You never know what the Underwoods are going to do next.

P.S. I determine the success of this episode by the fact that I did not touch my food or move an inch for all of the 50 minutes I watched it. 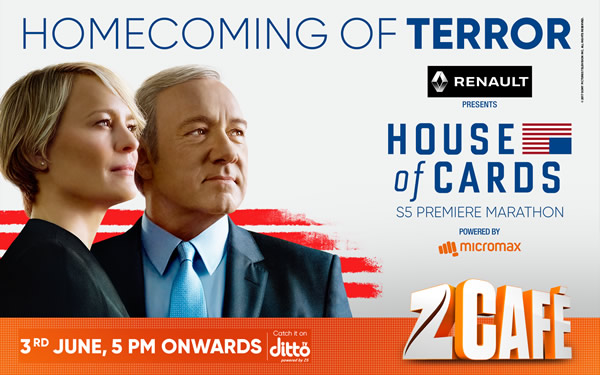 P.P.S. Did you know that Frank Underwood is coming to India with the television premiere of House Of Cards Season 5 on Saturday, 3rd June, 5 PM onwards, only on Zee Café, my favourite channel? Do check their Facebook page for details:  https://www.facebook.com/ZeeCafe